a wonderful Sunday in Mani 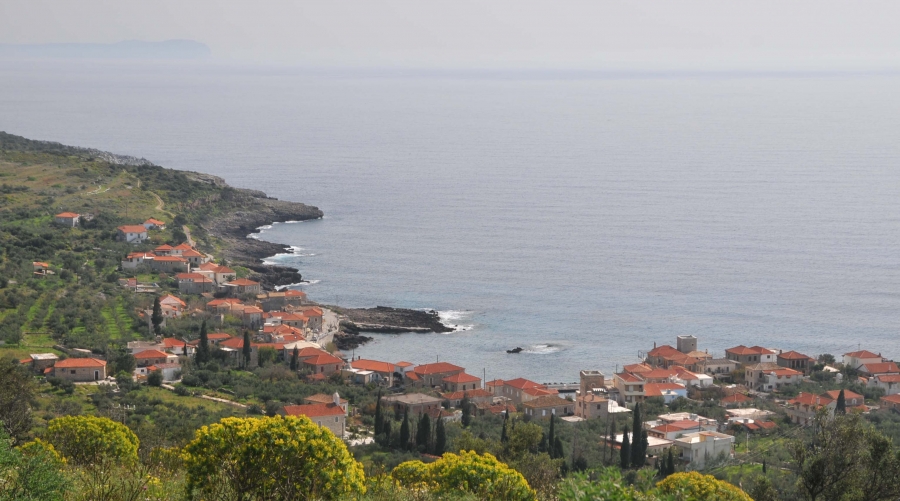 A wonderful Sunday in Mani (Trachila-Lagkada-Thalames)

6:45 o’clock , Sunday 16th of March, Kalamata – Waking up by the annoying sound of my cell phone alarm. It is probably the earliest I had to get up since I came to Kalamata more than five months ago to do my European Voluntary service. Looking through the window and seeing that the weather will be nice as well as the thought of walking in beautiful nature in just a few hours made it much easier to get up. When I was cycling through town to the meeting point of the mountaineering club it seemed like most of Kalamata was still sleeping. The streets were almost empty. I just met some joggers and some people walking their dogs.

As soon as getting on the bus the ambiance totally changed. The bus was full to the last seat and the people seemed quite awake. Everybody was very excited of what was awaiting us. The bus took off at around a quarter past eight. After more than an hour of driving up and down the mountains and through quite narrow street streets in the end, we made it to Trachila. We were followed by a mini bus and several cars full of more hikers. The bus dropped us off before the village since this was the last spot for it to turn. We walked through Trachila to get to the beginning of the path leading us towards Lagkada. Trachila is a beautiful quiet, little village at the sea. It’s rocky seaside is perfect to collect the sea salt, which many people from Trachila do. Reaching the path upwards everybody gathered together and one could see how many we were for this trip. We must have been around eighty people of all different ages and also some dogs accompanying us. We were joined by the mountaineering club of Tripolis, which also contributed to the high number of people. The path upwards lead us though olive trees, rocks, grasses and herbs as well as fields full of flowers. I saw many people collecting the herbs as well as wild asparagus and flowers on the way.

Lagkada is like Trachila a typical village for the Mani region. The houses are all built out of stone. The village is located on top of a gorge and that’s probably also where its name comes from (Λαγκάδι = gorge, glen). In Lagkada we took a rest, to eat something, fill up our bottles with water and sit in the sun. Some of us also went inside the cute little church. Before leaving for the next village, called Thalames we took a group picture in front of it. The path we went on to get to Thalames was a piece of the former “road” connecting Kalamata with Areopoli. On our way we stopped at another tiny church to take a quick look inside. Next to the path there were fields full of white and purple flowers and some people sat right in the middle to take pictures.We were sure that the spring has arrived. Lagkada and Thalames are pretty close to each other so we reached Thalames quite fast. Thalames architecture is also characteristic for Mani. We stopped under a huge plane tree for a little while in the center of the village. I found a little stone wall to lay down in the warmth of the sun.

For the way down we took another path from the one we hiked up. I was also gorgeous. The loose rocks on the way just made it a little difficult. I had to watch my feet in order not to fall but all I wanted was to look at the nature surrounding us and at the nice view down on the sea and on Trachila from above. The path ended before the village of Trachila and there we waited in the shade for the bus to pick us up again.

On our drive back everybody seemed a little exhausted from the walking and the already strong sun of March but happy. We drove back around 4 o’clock and watched the nice landscape passing us by on our way before returning to Kalamata. After all I call it a perfect spring Sunday!!!